The HP48 calculators have a text encoding that is based on the Latin-1 character set (a.k.a. ISO 8859-1) with the exception of 34 of the control characters.  These characters are 0x1F and 0x7F to 0x9F.  Instead of leaving these characters as the normal Latin-1 control codes, HP re-purposed these mostly unused control codes for 34 characters better suited for displaying on a high-end calculator.  Problems appear when the re-purposed characters are present in HP48 text or file names that are being used on a different computing platform (ex: transferring a file from an HP48 to a PC).  This sometimes results in garbage data, bugs, and crashes in software that doesn’t attempt to handle these special characters. 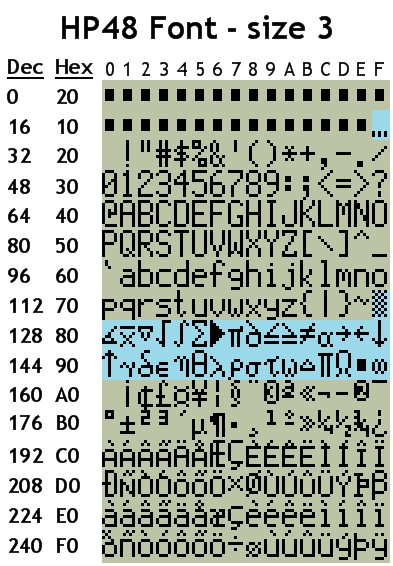 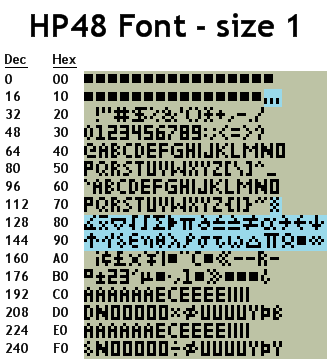 Unicode has become the ubiquitous standard since the time the HP48 was originally created.  Unicode supports over 1 million possible characters.  This means that it is now possible to convert HP48 text to characters that much of the world now uses.

However, with so many characters to chose from that look similar, sometimes the issue then becomes one to use.  For example, the number 0 and the letter O looks somewhat similar, depending on what font is being used.

To convert an HP48 character to a Unicode character, use the following mapping table:

* not all I/O Characters are listed here.

If you are using UTF-8, then it is necessary to encode each Unicode characters into 1, 2, or 3 byte sequences.  Details are available at http://en.wikipedia.org/wiki/Utf-8.

Other HP48 to Unicode Mappings

Note: efforts are being made (or will be made) to rectify the differences.